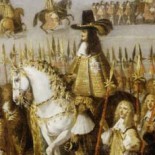 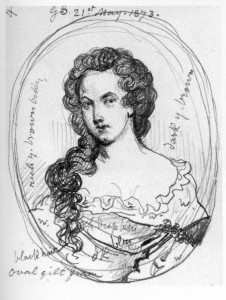 Sketch by George Scharf from a lost portrait of Aphra Behn

Little is known of Behn besides her writing. Fortunately, her writing is powerful enough to give readers a strong sense of her mind. Despite whatever we may guess about her physical life, we can be very well acquainted with her opinions.

Behn was born in England, possibly to a family named Johnson. She married a man named John Behn. No one knows for sure if her husband died or they separated, but she continued to use his surname as her pen name long after. There is no history of her in any tax or church records. Evidence from the British government shows us that Behn was recruited as a spy, known as agent 160, or Astrea, the code name in which she also published many of her later works. It is during this time, working as a spy, that many believe she visited the Dutch colony of Suriname.

Aphra Behn’s most famous story is that of Oroonoko, the royal slave. Scholars use Oroonoko as an anti-colonialism commentary, but perhaps Behn’s commentary was much stronger than a statement on colonialism. Perhaps Behn was providing a negative stance on the system of slavery itself.

Despite whether her work is wholly based on fact or fiction, many details of the account remain true, such as most of the descriptions of Suriname and names of plantations. However, the major reason people are slow to believe that Oroonoko is an anti-slavery work is because Behn describes Oroonoko with heightened imagery and status likened to a white man, making him less African and therefore, more relatable in English eyes.

The question is: Would an English audience even read the story of Oroonoko if he was an ugly and poor, wild savage? And could Behn be attempting to simply prove what she had seen: that African natives were civilized and some even educated, and it was an outrage to see such people enslaved?

We know Behn was an original feminist who brought light to the thoughts of right-less women. Why is it unreasonable, then, to claim she attempted to bring awareness for other minorities on the outskirts of society?

Behn asserts Oroonoko and Imoinda originated from “Coramentien,” the Gold Coast of Africa. This area was actually made up of “Koromantin” tribes that included the Akims, Fantins, Ashantees, and Quamboos. In several other accounts, even those written by slave traders, the Coramentien or Koromantin people were believed to be the Africans of highest intelligence, strength, power, and bravery.

“The Koromantyn, or Gold Coast Negroes, from all others, are firmness both of body and mind; a ferociousness of disposition; but withal, activity, courage, and stubbornness, or what an ancient Roman would have deemed an elevation, of soul” (Sypher).

The Koromantin people were known to be a people of endurance and beauty. They were described as closer to European in stature and were elevated in position due to their language and skill. The Koromantins were considered so intelligent that Jamaican slave owners were cautioned against owning them for they often rose up and led rebellions if treated unjustly.

Edward Long, an infamous plantation owner from the West Indies who believed those of African descent were not fully human, described the Koromantins as the following: “Their language is copious, and more regular than any of the other Negroe dialects; they despise death…and can smile in agony. Their persons are well made, and their features very different from the rest of the African Negroes, being more of the European turn….They are good marksmen, and their bodies by this means acquire a surprising degree of hardiness, and ability to undergo fatigue; but they have an invincible aversion to every kind of labor”(Sypher).

Statue in Jamaica of celebrated hero, a Coramantee descendent

After some slaves killed a planter, Christopher Codrington, a missionary in the 1700s, commented that the owner “was guilty of some unusual act of severity, or rather some indignity towards the Corromantes, for they are not only the best and most faithful of our slaves, but are really all born heroes. There is a difference between them and all other negroes beyond what tis possible for Your Lordship to conceive. There never was…a man of them but will stand to be cut to pieces without a sigh or groan…No man deserved a Corramante that would not treat him like a friend rather than a slave” (Sypher).

Here is proof that Oroonoko and Imoinda represented an actual tribe that was held in higher esteem than any other within their race. So maybe, after all, Aphra Behn is using precise rather than exaggerated descriptions for her characters. This would make her story a work of historical fiction, not romanticism. Perhaps she used those who were highly valued, even amongst whites at the time, to heighten the tragedy of the situation and bring attention to the dehumanization of a people deemed heroic in history. Either way, the tale of Oroonoko was intended to deeply move its audience at the conclusion and Behn continues to achieve this centuries hereafter.

Sypher, W. “A Note on the Realism of Mrs. Behn’s Oroonoko.” Modern Language

This entry was posted on November 5, 2015 by creoleana in Aphra Behn.