Mirror, Mirror on the wall…How do I know what I know at all? 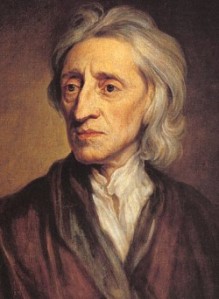 John Locke (1632-1704) Physician, Philosopher, and Political Theorist of the Enlightenment

John Locke uprooted the famous theories of Renee Descartes, often referred to as the father of philosophy, with his groundbreaking epistemology that challenged innate knowledge and the divine right of kings. For readers new to theory, Epistemology is defined by Merriam-Webster as “the study or a theory of the nature and grounds of knowledge especially with reference to its limits and validity”. The new theories introduced by Locke shaped the construction of the United States government and have continued to influence constitutional law and present day legislation.

Philosophy may be considered dull musings of pretentious minds by many people in this modern age, but John Locke was an activist and an agent of change during the Enlightenment. He was the force that catapulted society from the tyrannical monarchies ordained by God to the modern ideals of life, liberty, and the pursuit of happiness on which we pride ourselves today.  Fortunately for us, the divine right to rule has been replaced with the idea that all people are created equal and only their experiences cause people to become superior or inferior to each other.

In “An Essay Concerning Human Understanding,” John Locke introduced the new way of thinking that challenged the accepted theories of inherent knowledge and predestined rule. He settled the nature versus nurture debate of his day with the simple conviction that children do not all exhibit the same knowledge and thus no knowledge is born to us. The capacity to understand may vary between individuals, but experience is what shapes our understanding. This theory that we all begin with a clean slate was major change from the popular theories of Descartes, and brought about the first steps toward equality.

In Section 87 of his “Second Treatise of Government,” Locke states that man has a right “to preserve his property, that is, his life, liberty and estate, against the injuries and attempts of other men.” Additionally, Locke discusses the importance of the pursuit of happiness in his “An Essay Concerning Human Understanding,” in which he states that “the highest perfection of intellectual nature lies in a careful and constant pursuit of true and solid happiness” (242). This should sound familiar to anyone in the United States as the Declaration of Independence clearly states that “all men are created equal, that they are endowed by their Creator with certain unalienable Rights that among these are Life, Liberty and the pursuit of Happiness.”

Locke was also the first to determine that government should be divided into separate branches with different powers. The Founding Fathers of the United States were obviously big fans of John Locke!

Once more, John Locke challenged conventions and argued that the state of nature would be peaceful because humans are generally good. However, Locke said that disputes over property could lead to chaos without a government capable of making judgements when disputes arise. Locke believed in a weak government with a separation of powers that would exist to protect the property of the people.

He may not be one of the Founding Fathers of the United States, but John Locke certainly influenced them enough that his theories developed during the Enlightenment live on through the Constitution and the American dream of life, liberty, and property.

Confused by all of this? Here’s a recap:

This entry was posted on November 7, 2015 by creoleana in John Locke.