If it Ain’t Baroque, Don’t Fix it: Satire and Breaking Norms in The Beggar’s Opera

The Beggar’s Opera, written by John Gay, first premiered on January 29th, 1728.  It was “the first recorded long running play, which managed 62 successive performances at the Lincolns Inn Fields theatre” (Gillan).  Gay wrote the ballad opera to satire the predominant operatic style, and used music to do so.

It is important to note that The Beggar’s Opera is actually considered a ballad opera.  The genre was created by Gay specifically for this work, and is at the heart of his departure from traditional operas.  Prior to this work, operas would be entirely sung, consisting of arias and recitatives.   An aria is usually a solo for one voice, complexly written to display musical talent, and accompanied by the full orchestra.  Typically, because the goal of an aria is to be musically appealing, it may not be easy to understand.  Recitatives would be included as a more simplistic way to push along the plotline.  They are simple phrases of music which are sung in the rhythm of normal speech.

In the music clip you can hear the recitative and aria “Lascia Ch’io Pianga” from George Frideric Handel’s Rinaldo, performed by the Brewer Baroque Orchestra.  Rinaldo was Handel’s most popular opera and was released in 1711.  The first forty or so seconds are the recitative.  Notice that the voice is accompanied only by a harpsichord (which acts as a continuo), and sings a series of short, easy to follow notes.  After the aria begins, at 45 seconds, you hear strings join the accompaniment, and the notes become much longer.

Gay, in his Beggar’s Opera¸ opted to not use arias or recitatives.  Instead of recitatives, his actors simply speak, and in place of the arias, Gay used airs.  Airs are mostly quite short, many under a minute long, and nearly all under three minutes, and the music was based on folk music from the time period.  In this clip you can hear Roger Daltrey (of The Who fame) as MacHeath perform air LXVII, “Since Laws Were Made,” the tune of which was borrowed from “Green Sleeves.” 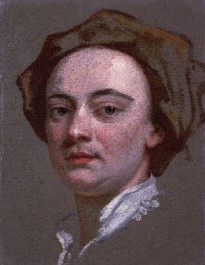 Another thing that is noticeable in the clip is that Gay wrote the ballad opera in English.  The other major English composer of this time was Handel, whose Rinaldo is included above.  His operas were written in Italian to match the popular style of the time.  Gay chose English to make his work more appealing to a larger audience, but also as a way to satirize the traditional operatic form at the time.  Not only was it written in English, but the characters were prostitutes and thieves!  The protagonist, Peachum, is in charge of a crime ring and uses his connections with the court to decide which of his criminals is valuable enough to keep, and who should be sold for hanging.   Gay uses lowly characters which is in opposition to many of the operas being performed at this time.  In Handel’s Rinaldo¸ for example, the protagonist, Rinaldo, is a nobleman who encounters Goffredo, the leader of the first crusade.

In writing The Beggar’s Opera, John Gay broke the rules, and in doing so, created a new genre, and made a lasting impression on English music.  Even Handel, unable to compete by writing traditional operas, chose instead to write oratorios.

This entry was posted on November 30, 2015 by creoleana in Beggars Opera, Music.