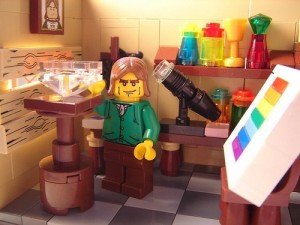 Lego Newton showing his pride in discovering the refraction of color

Sir Isaac Newton was a man of many talents.  From astronomy, science, and physics, he developed multiple theories and laws— the Theory of Color, Laws of Gravity, as well as other important theories and laws.

One of the most famous theories is that of refracting light through a prism to display the colors of the rainbow existing within white light. Many explanations of Newton’s Theory of Color exist throughout scholarly texts and media outlets.

Creativity Express offers a simple explanation of how the colors were discovered and how their properties complemented each other.

Interestingly, despite Newton’s theory of color being the prominent one studied and discussed today, a conspiracy exists which accuses him of stealing work from other scientists around his time.  This opens a number of doors for speculation about how much of his discovery is original.  This creates a problem for the study of Newton’s discoveries because his work may have been stolen from other scientists. The originality and detail of his work has been comprised by the assumptions of Newton stealing from other scientists.  Therefore, we may actually be studying a pirated version of the Theory of Color.

One blog,  History of the Color Wheel  explores different theories that were developed

A color theory different from that of Newton’s

before, during, or slightly after Newton’s own discovery. One, Richard Waller’s color chart is the most detailed and developed of the theories presented.  Waller’s was developed a little before Newton which, according the conspiracy theory, may have led to one of the main ideas Newton “borrowed” .  Other theorists and authors have written on the idea of Newton stealing from other scientists through articles, websites, and books detailing the backgrounds of not only the relationships between Newton and other scientists, but also the background behind the theories themselves.

Half Color Half Black and White…Half Newton’s?

Stephen Gray and John Flamsteed.  This book explores the notion that Newton, Gray, and Flamsteed were colleagues at one point. Both other scientists claimed that Newton often had ulterior motives for working with them on developing the theories.  Both commented on the fact that Newton was wary of sharing any findings he discovered, but had no problem using ideas from their discoveries.  Flamsteed was the least worried about Newton’s actions, but Gray was  outraged that his colleague had the nerve to steal from him.  This created tension between the three that eventually drove them apart.

While the suspicions of theft going on behind the scenes is very serious, several comical versions of the development of colors, the relationships between the colors, and Newton’s discoveries have become the  subject of contemporary satire. In one, Bryan Oden uploaded a funny color song in which he asks the viewers to play along in guessing a particular color. Though Oden does not mention Newton in his song, the relationship between the different colors is explored as normal everyday objects are being related to a particular color.  This may have been how Newton started naming and categorizing the colors into their appropriate categories.  While the video is humorous and the lyrics slightly off beat, Oden explores not only basic colors, but also more complex colors existing within the spectrum of the color wheel.  Newton did the same thing when he refracted the light through a prism to display the colors existing within white light.

Ironically, although Newton has been accused with stealing from other scientists and colleagues, his work is still the theory studied today.  The process in which he breaks down the method he used in gaining his knowledge in described in such vivid detail that it is hard to believe that he stole work from others.  But nonetheless, the possibility still exists.

This entry was posted on December 8, 2015 by creoleana in Science, Sir Isaac Newton.